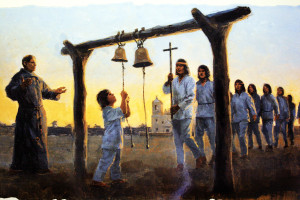 This constitutes a preliminary list of films, music, and other multimedia available through this site, or via those vendors noted. You may also find us by way of YouTube.com postings.  If you are unable to find the videos or that music listed, please do search other online sources, such as the YouTube.com archives for the NEH Landmarks Fourteenth Colony workshop located at http://www.youtube.com/user/The14thColony.

Follow the links to the Pinterest.com site where you may find each of those cattle brands identified with the Spanish missions and presidios of Alta California. See http://www.pinterest.com/pin/532058143447039852/ for all California missions brands.

During the course of the NEH Landmarks workshop convened in July of 2013, the cattle brands of those missions identified with the California central coast were used to organize teacher cohorts by grade level, and may be used to organize students into similar cohorts during classroom exercises. The specific cattle brands used may be found at the following link: NEH Cattle Brands.

In Search of History: Saints and Sinners of The California Missions. 50 minutes. A&E, 1998. Documentary.

Junípero Serra – His Life, His Legacy, And the Missions. 2013. 25 minutes. Documentary.

The Great Stone Church: A Treasure in Trust for Tomorrow. 2000. 8 minutes. Documentary.

El Rancho De Las Golondrinas: Take a journey to the past. 1997. 12 minutes. Documentary.