Research pertaining to the California missions depends directly the quality of those sources available to the researcher. Primary resource documents consist of that correspondence, those reports, and related period historical documents needed to fully interrogate the past. Because the Franciscan friars or Fernandinos prepared much of their correspondence in Spanish and Latin, and occasionally in indigenous dialects, primary resources of the Mission period present a significant challenge to English-only researchers. So as to provide some sense of the value of primary resource documents, we will continue to post select samples of such documents on this page.  To access Acrobat PDF copies of each of the two articles, click on each image posted below: 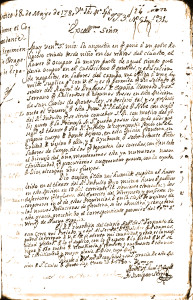 The following transcription and translation of this letter penned by Fray Junípero Serra, OFM, in 1780, was provided by Mr. Ralph Serrano Oaxaca, a descendant of Iswitem (Wolf Clan) of the Mt. Cahuilla Indians.  Spanish soldier Francisco Serrano, for whom this letter was prepared by Fray Serra, is Mr. Ralph Oaxaca’s ancestor. The research behind the following transcript was made possible with the assistance of Ms. Cathy Nowak, Sustainability Planner at OC Parks.

Mr. Oaxaca cites two additional sources for documenting his ancestors links to Father Serra.  The first of the two references noted by Ralph Serrano Oaxaca derives from the writings of Father Crespi (cf., Brown, 2001: 104), and notes that “during at least one year preceding Crespí’s death, soldiers and others managed the crops and as early as January of 1780 Serra tried to get a pardon for an army deserter who was capable of taking over the field duties.”

According to Mr. Oaxaca, “at the time of Francisco Serrano’s desertion, Father Juan Crespí was ill and in need of assistance with the agricultural business of the mission, hence the letter by Serra.”  In addition, Antonine Tibesar, Vol. 4 page 165, makes note of the fact that Serra acknowledged the fact that all three men, including Father Serra, Father Crespí, and Francisco Serrano, were living in the same house, hut, or jacal. In other words, Francisco Serrano was Fray Junípero Serra’s roommate for a time at Mission San Carlos Borromeo.

The heaviness of mind that [this matter] places on a poor religious [man who,] since childhood, has been raised in the retreats of the teaching staff – having to occupy the major part of that time, which I was to occupy, in the catechism of gentiles, the education of neophytes, [and] the cultivation of fields – [and] obligates me to [make] a humble request to His Excellency: that [His Excellency] permit that a soldado desertor from the regiment called Dragones de España,  named Francisco Serrano, [be given permission to remain at the mission of San Carlos de Monterrey. [Francisco Serrano] happened to be in the mission of San Carlos de Monterrey for a few months, [and being that] he declared himself as [soldado desertor] and went before the governor of this province, Don Phelipe de Neve, with the occasion of [obtaining] the royal pardon that His Majesty issued in celebration of the birth of [His Majesty’s daughter,] the princess, our señora. [Specifically, that Francisco Serrano] be permitted [to complete] the eight years [of his military service], in accordance [with] the compliance of said royal pardon, [at the mission of San Carlos de Monterrey, where] he will be required to serve in the regiment that he deserted from this frontier mission. In the capacity of vezino and as an assistant of the mission, or [as] overseer of our cultivated fields, which the harvests are dependent of, [and] with which, throughout the year, we maintain this already numerous Christianity that we strive to augment, inasmuch as, with God’s help, our strengths will accomplish.

My humble request is [motivated by] the occasion of having read the royal pardon [and] the compliance [found] in it that I myself made known [to Francisco Serrano] from this mission on the 19th [day] of the current [month], the clause [is the] following: the deserters, as they where, of the precinct of the viceroyalty and [that] would want to incorporate themselves into the viceroyalty of these provinces, or in the class of vezinos of the new frontier settlements, will be admitted and granted this grace, [but without] primacy over the corresponding permission from His Very Excellency [and] Señor Viceroy of New Spain.

My prelate, the Reverend Guardian Father of the Apostolic College of San Fernando of that court, and Don Melch[or] de Sera, the Secretary, may inform His Excellency that, indeed, my age and feebleness limit [me]. [These two] factors are the genuine need of that which I request. With that [said], I hope for His Excellency’s compassion, and [that His Excellency] decide, via said means, to remedy my request for [the] fomentation and augmentation of this new Christianity, and [for] God’s major glory; His [Divine] Majesty safeguard His Excellency many years with good health, and [hear] His holy prayers for this mission of San Carlos de Monterrey, January 23 of 1780.

Very Excellent Señor,
I kiss the hand of His Excellency,
[Your] humble servant and chaplain
Friar Junípero Serra