Secondary resources consist of those interpretive works resulting from research based on primary resources and other second-hand studies by academic and community scholars and or avocational enthusiasts. Much of that which has been published on the subject-matter of the California and Southwest missions is in effect based on such interpretive studies. Given that the majority of those primary resource documents available for the Mission period were originally penned in Spanish or Latin, English translations technically represent interpretations as well, although paleographers and translators seek culturally and linguistically appropriate analyses so as to assure accuracy.  Archaeological reports, by contrast, constitute primary resource documents born of interpretive studies based on primary field research.  So as to provide some sense of the interpretive value of secondary resources, we have posted two such studies penned by the co-authors of this website. To access Acrobat PDF copies of each of the two articles, click on each image below: 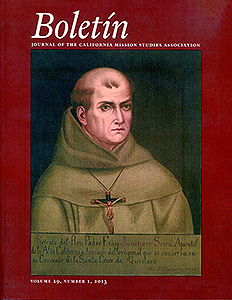 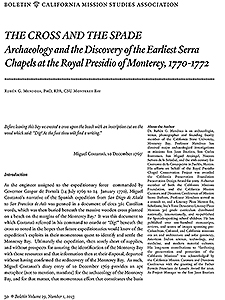